Digitalization at 1% Interest Rate: Securing State Loans for IT Projects and Robotization

Digital projects streamline the operations of industrial enterprises and allow for cost optimization. Human resources released from routine labor as a result of automation processes can be reassigned to perform more creative tasks. Russia has declared digital development as a national priority area in the near future.

По этTherefore, in 2018 the Industrial Development Fund (IDF) prepared a special program which will ensure soft financing of digital projects. The new Industrial Digitalization instrument was unveiled at INNOPROM-2018. The program was launched in September..

"Industrial Digitalization may benefit companies working in a wide range of industries. The main focus of the program is not the creation of specific products, but the optimization of existing production facilities by implementing digital technologies and, consequently, ensuring higher efficiency of onsite manufacturing and technological processes,"

Denis Manturov, the Minister of Industry and Trade of the Russian Federation, stated.

The IDF explains that the Industrial Digitalization program targets various projects, including IT systems for data management and processing, development and design systems, and implementation of new technologies, e.g. robotics complexes or 3D printers.

The terms and conditions for procuring funding under the IDF program are different from loans offered by most banks. First and foremost, quarterly borrowing costs of IDF loans constitute 1-5% p.a., and the interest rate will decrease if applicants implement Russian software or contract local integrators. Financial support is provided for up to 5 years.

"Our competitive advantage over the majority of bank loans is that we do not require the repayment of the principal amount within the first 3 years. We provide companies with the opportunity to get the business going and then start making payments. But we will definitely monitor the progress of approved projects,"

IDF Director Roman Petrutsa stated, as he presented the program at INNOPROM-2018.

Industrial Digitalization program provides loans to projects worth RUB 25-500 mln. The IDF stipulates that the applicant contribute no less than 20% of program budget using the applicant's own funds or investor commitments. 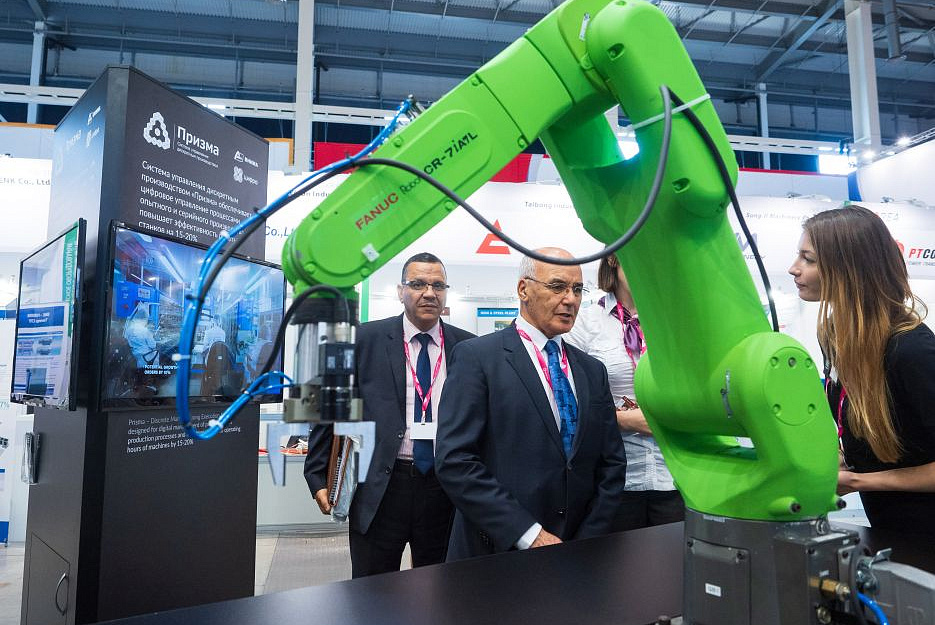 IDF funding may be used for robotization of production / Photo courtesy of innoprom.com

Market participants involved in the development, manufacturing, and implementation of new technologies confirmed that they had heard about the IDF program and were willing to pass the information on to their clients.

"We have a very positive opinion of the program and believe that it attests to government institutions' major interest in digitalization. Our experience indicates that production sites see systemic improvements when involved parties take full responsibility for all aspects pertaining to the implementation of digital technologies, including the financial aspect," representatives of Zyfra, a developer of industrial digital solutions (Internet of Things and artificial intelligence), emphasized.

ABAGY Robotic Systems, which offers adaptive robotics complexes to industrial enterprises under the service model, points out that the IDF program also appeals to the robotics market. ABAGY Robotic Systems Director Antonina Bondareva cited the data compiled by the Russian Association of Robotics (RAR): only 15% of Russian enterprises which install robotics complexes at their production sites can take advantage of loans over RUB 20 mln for projects worth more than RUB 25 mln.

"In order to promote the use of industrial robotics by Russian companies, we need to decrease the minimum loan amount to RUB 8 mln and the overall project budget to RUB 10 mln. If we do that, loan-based financing will be available to 50% of companies which implement robotics complexes to boost production efficiency,"

The company also has its suggestions for expanding the list of system integrators operating in the robotics segment who qualify for IDF support. According to ABAGY Robotic Systems, the IDF provides production enterprises with loans to be used for the purchase of equipment and does not consider companies which render related services or lease robotics equipment under the service model.

Experts point out that in spite of the fact that digitalization is being actively promoted at the state level, regions are still wary of it due to the lack of information. Moreover, it is important to provide not only financial support, but also overcome legislative red tape which hampers the development of the high-tech segment.

Digital Manufacturing: Integrated Solutions has been selected as the main theme of INNOPROM-2019. INNOPROM business program will include forums wherein corporate representatives will discuss issues and solutions pertaining to the implementation of digitalization in Russia, while the exhibition will feature the latest digital technologies designed for industrial application.